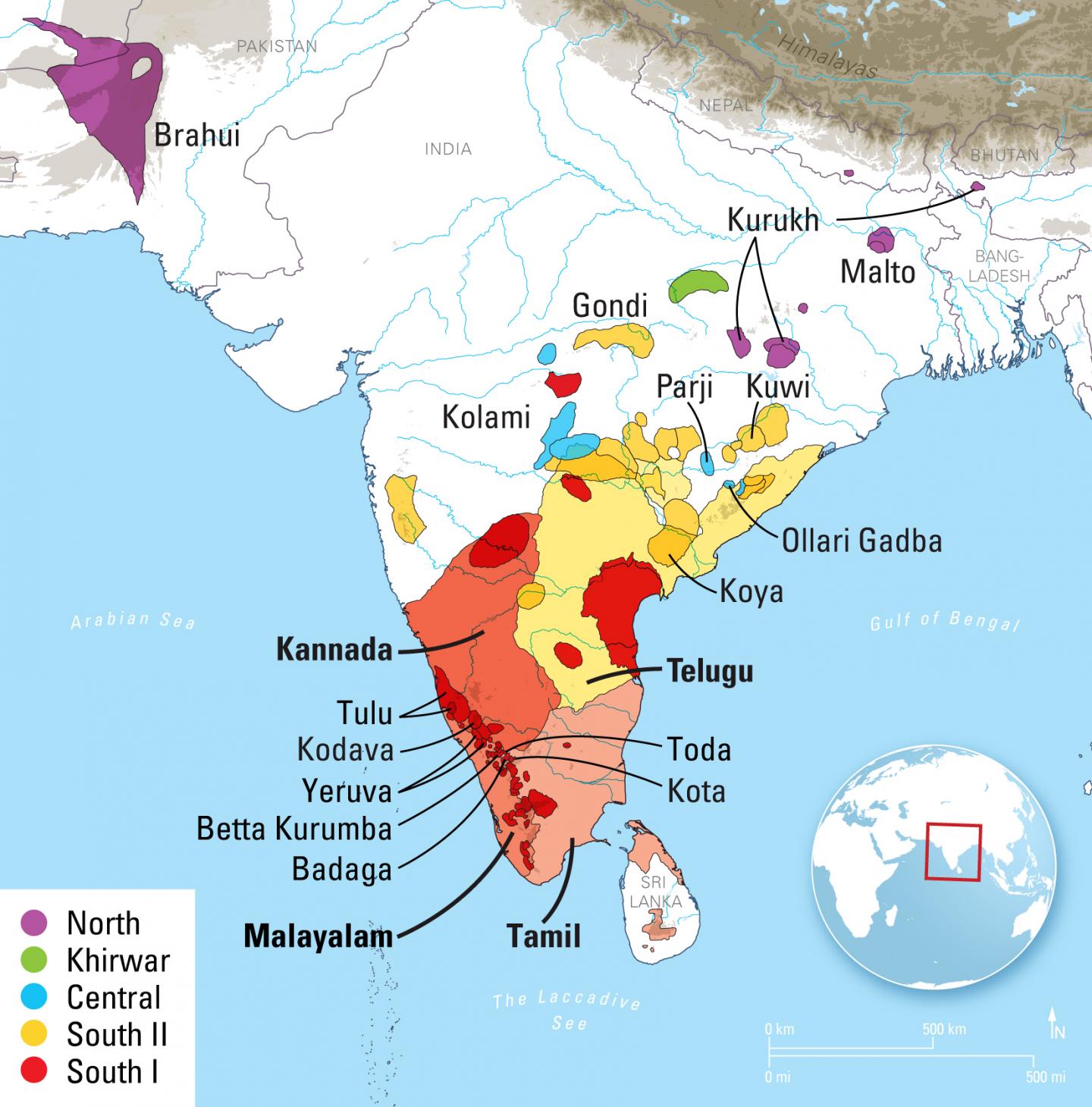 The origin of the Dravidian language family, consisting of about 80 varieties spoken by 220 million people across southern and central India and surrounding countries, can be dated to about 4 500 years ago. This estimate is based on new linguistic analyses by an international team, including researchers from the Max Planck Institute for the Science of Human History, that used data collected first-hand from native speakers representing all previously reported Dravidian subgroups. These findings, published in Royal Society Open Science, match well with earlier linguistic and archaeological studies.

South Asia, reaching from Afghanistan in the west and Bangladesh in the east, is home to at least six hundred languages belonging to six large language families, including Dravidian, Indo-European, and Sino-Tibetan. The Dravidian language family, consisting of about 80 language varieties (both languages and dialects) is today spoken by about 220 million people, mostly in southern and central India but also in surrounding countries. Its four largest languages, Kannada, Malayalam, Tamil and Telugu have literary traditions spanning centuries, of which Tamil reaches back the furthest. Along with Sanskrit, Tamil is one of the world’s classical languages, but unlike Sanskrit, there is continuity between its classical and modern forms documented in inscriptions, poems, and secular and religious texts and songs.

The study of the Dravidian languages is crucial for understanding prehistory in Eurasia, as they played a significant role in influencing other language groups. The consensus of the research community is that the Dravidians are natives of the Indian subcontinent and were present prior to the arrival of the Indo-Aryans (Indo-European speakers) in India around 3 500 years ago. It is likely that the Dravidian languages were much more widespread to the west in the past than they are today.

In order to examine questions about when and where the Dravidian languages developed, the researchers made a detailed investigation of the historical relationships of 20 Dravidian varieties. Study author Vishnupriya Kolipakam of the Wildlife Institute of India collected contemporary first-hand data from native speakers of a diverse sample of Dravidian languages, representing all the previously reported subgroups of Dravidian.

The researchers used advanced statistical methods to infer the age and subgrouping of the Dravidian language family at about 4 000 – 4 500 years old. This estimate, while in line with suggestions from previous linguistic studies, is a more robust result because it was found consistently in the majority of the different statistical models of evolution tested in this study. This age also matches well with inferences from archaeology, which have previously placed the diversification of Dravidian into North, Central, and South branches at exactly this age, coinciding with the beginnings of cultural developments evident in the archaeological record.

Future research would be needed to clarify the relationships between these branches and to examine the geographical history of the language family.